Hi, we are Marie and Lorenzo, living ‘la dolce vita’ in a small Medieval town in Tuscany!

We are the proud owners of a 12th Century Medieval tower house Casa Colomba which we have been lovingly restoring since the day we were handed the keys back in 2007!

As you have probably gathered by his name Lorenzo is Italian! But what you should also know is that he is fiercely proud of his Sicilian roots although he grew up in the Northern Italian city of Torino. Marie was born and bred in Leamington Spa a small town in the centre of England – a British mix of English, Scottish and Jamaican with a slither of Southern Italian. We met in a small town in Surrey, England back in 1997 and below you can see our journey to Italy in a nutshell!

We purchased Casa Colomba a Medieval tower house in the historic centre of Vicopisano in 2006 and then came the painstaking and loving restoration of each of its floors including a 12th Century tower room. However as with many historic restoration projects the budget ran out before the project was finished!

To inject more funds into the project, the top floor of our new home became an overnight vacation rental – we took some photos and posted our details on the web and within 24 hours we had received four enquiries and hence our journey began.

Our little village soon had a steady stream of visitors from overseas and both our guests and the locals were loving it.  Our guests loved the idea of staying in an historic building full of character as well as discovering the authenticity of the local area.

Before we knew it local residents were asking if they could open their homes to visitors and share with them the traditions of their village. We liked the idea and hence Authentic Tuscany was born.

Our Journey to Italy

In 1999 we decided to move to Italy for a better quality of life and to escape the English weather! We decided on Lago d’Orta, a charming lake in Northern Italy as Lorenzo had work connections there.

In 2000 we got married and enjoyed a fairytale wedding on Lago d’Orta with family and friends. We lived in the small village of Pettenasco with beautiful views over the Pre-Alps.

In 2002 a chance weekend invite to Tuscany was the reason we said goodbye to the Lakes. It started with a daytrip to Pisa and we loved the vibe of this University City but it was the surrounding countryside and hidden hilltop towns which really grabbed our imagination.

In 2003 Lorenzo found work as a head barman in a lovely hotel on the Tuscan coast not far from the City of Pisa. Marie continued her day job as longhaul cabin crew for a British airline – being close to Pisa airport made the commute back to London easy. We found an apartment in one of the small villages within the district of Vicopisano in the Province of Pisa.  We totally fell in love with the historic centre of Vicopisano, the surrounding hills and countryside and we decided we would look for a new home here.

It took 3 years and a viewing of over 50 houses before we found our Casa Colomba.  Colomba meaning dove is the name we chose for our new home in honour of Marie’s grandmother who had passed away in 1997 before we met, she was half Italian and I knew she would have approved of our journey!

Working with and Supporting the Local Community

We now help local owners rent their homes as vacation rentals. We are here on site so we help with any language issues which could occur and to make sure the properties offer certain amenities which we believe to be important for our international guests.

Once guests arrive here in Vicopisano we love sharing our insider knowledge on where to eat, how to get around and those off the beaten tourist trail ‘must sees’!

We have also worked closely with the local community but even more so in the uncertain times of the pandemic where we have had to diversify somewhat.

We are currently collaborating with local artisans and producers bringing the beauty and authenticity of their products to a wider audience through our social media.  You can follow us Authentic Tuscany on Facebook, Instagram and Pinterest.  Casa Colomba also has her own Facebook page and we also run a Facebook group – Authentic Tuscany Travel Tips – a lovely community of those who love everything about Italy especially Tuscany. 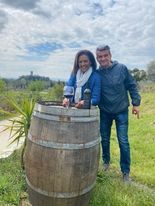